LA Phil Student Insiders collaborates with USC Annenberg’s Master of Arts in Specialized Journalism (The Arts) program and USC Thornton School of Music to give students opportunities to build their storytelling skills and immerse themselves in the L.A. arts scene. This interview was originally published in the student-run online arts and culture magazine Ampersand.

Conrad Tao, the internationally acclaimed composer-pianist, lives in an imaginative cosmos of his own, where vulnerability reigns. He is not afraid to perform barefoot. He adores the world of techno. He struggles to envision himself in the self-conscious setting of competition. And he grew up creating pop music mash-ups on Tumblr.

Over the phone recently, Tao said he is “all about freedom” when it comes to music.

You get the sense Tao is always in a state of deep contemplation. His calm tone is genuine and sensitive but tinted with a kindling fire.

On March 10, the 25-year-old performed a solo piano recital at Walt Disney Concert Hall. The first half of the program included Frederic Rzewski’s Which Side Are You On? and Aaron Copland’s Piano Sonata (1941), both featured on his American Rage album, while the second half highlighted Rzewski’s hour-long exploration The People United Will Never Be Defeated! 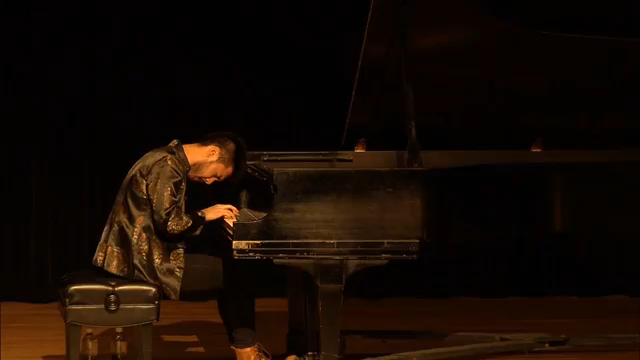 As part of the LA Phil's remarkable Power to the People! Festival, Tao curated his program to reflect the historical, social, and political world around him. His fascination with Copland, for instance, increased after watching an explicitly homophobic ad by Rick Perry for the 2012 presidential campaign, scored to Copland-esque music resembling “Appalachian Spring.” Although Copland’s music often symbolizes American nationalism, the irony of Copland, who everyone – except for apparently Perry, the Republican – knows was gay was too good for Tao to resist.

“I will never not find it ironic that the music of a gay, commie Jew can be so abstracted and so turned into an aesthetic,” he said. “A style of vague Americana which is basically used to stoke nostalgia, nothing else.”

Inspired by labor union struggles in the U.S., Tao learned the first Rzewski piece, off-set by the second, a set of 36 variations based on a popular Chilean protest tune from the Pinochet regime. Each work is full of technical challenges, such as sudden jumps from low to high registers and rapid nimble passages, as well as interesting score markings, requiring the pianist to whistle, slam the piano lid, or play a lengthy improvisation.

“The fight for justice doesn’t end,” Tao said about the challenging score and its parallel to his “battle” to learn it. “Even if you rationally understand that, it’s not an easy emotional world to capture or convey.”

“The fight for justice doesn’t end. Even if you rationally understand that, it’s not an easy emotional world to capture or convey.”

Born in Urbana, Illinois, to a family of non-musicians, Tao was 18 months old when he first tickled a piano’s ivories. By age 12, he was touring professionally. Tao said he was lucky to have been able to break through at such a young age. He never had to participate in piano competitions, and this fact enabled him to develop artistically without seeking approval and recognition from others, he said.

“I’ve always kind of done my own thing,” Tao added. “Still to this day, I feel like what I’m trying to communicate and embody is: Come as you are.  It demands that you actually bring yourself into the work, and it demands that you explore a certain kind of freedom onstage. The wonderful thing that one realizes is that freedom can be really scary, but that’s not a bad thing.”

Tao has been improvising as long as he’s been reading notated music, but the first time he experienced improv on stage was in a 2016 concert with percussionist Tyshawn Sorey. Tao said he felt giddy and vulnerable, like he was able to get away with sharing something with the audience he never thought he could.

Then he experienced an unforgettable sense of liberty again a year ago, while working on a recording for David Lang’s opera, the loser, for solo baritone accompanied by an ensemble of piano, percussion, viola, cello, and double bass. The score focuses largely on bold rhythms and repetitive minimalism that serve the baritone’s ominous narrative. During the recording session, Lang called the score merely a “proposal,” and gave Tao the freedom to add his own ideas to it.

As a composer himself, Tao is obsessed with this idea he calls “excess,” referring to the layers of sound that could be considered excessive to the score. In the tradition of notated music, classically trained players often see the score as a Platonic ideal. This is the narrative Tao grew up with, and that he has since come to understand is “flat out wrong.” Rather, he now imagines the score to be like the gates in competitive downhill skiing; they demark the path and are meant to be ricocheted through.

“Excess. I find it to be for me like the most vividly human aspect of musical performance,” Tao said. “Sounds of effort, all of these sounds that I really hear as these traces of the human.”

Tao also carries improvisation out of the piano keys and into his life, and will often make rash decisions on the day of performance. Will he perform barefoot or not? (It depends on how low the pedal is to the ground.) Then there was the morning in New York when he was riding the subway to Carnegie Hall, where he would perform later that night. He couldn’t bring himself to listen to anything other than Daniel Johnston’s pop song “True Love Will Find You in The End,” through his headphones. He decided he would sing it for the recital’s encore.

“I’m going to listen to that impulse and, you know, do it,” Tao said.

Of the practice room, viewed by so many as a torture chamber, Tao unsurprisingly sees it differently: “You could open up this new way of relating to the score where the score is not necessarily this intimidating beast for you to conquer. Maybe it was never about conquering it in the first place.”

“The internet is like a constant, endless barrage of projection, and all of our naked desires. I tend to see it as almost embarrassingly human.”

Tao grew up using the internet and saw it as a place for expressing his individuality. During his Tumblr phase circa 2010, he posted audio memes and music mash-ups. Tao reminisced about one of his greatest hits: a mash-up of the Twin Peaks theme and “Everytime” by Britney Spears, which he created after re-watching Spring Breakers.

“The internet is like a constant, endless barrage of projection, and all of our naked desires,” he said. “I tend to see it as almost embarrassingly human.”

In today’s internet-driven world, however, Tao also believes the classical music hall is vitally important, in part because it is an opportunity to put your phone away.

“I have had the opportunity to bring friends to shows of mine, friends who don’t go to classical concerts usually,” he said. “And that is something that they often say, that it was so nice to just sit and listen.”

The closest thing he has found to a good concert hall experience is a really good club experience. Both musical styles deal with the age-old concept of tension and release, and both settings are for “unplugging.”

By playing less of the old stuff and more new classical music – and new music, period – Tao’s goal is to rid classical music of its default settings, urging listeners to come to concerts hungry for the unfamiliar. Music is evidence of human desire, he said, and people will always have an impulse for narrative and for finding meaning.

“It’s a human pursuit,” Tao said. “I guess I have this deep faith that the need for music will never go away.”

Polina Cherezova is a writer and pianist from Los Angeles, CA. She is a graduate student at USC’s Thornton School of Music and Annenberg School for Communication and Journalism. In 2019, she graduated from UCLA with a double B.A. in Piano Performance and Communications, where she also worked as an arts reporter for the Daily Bruin. Polina is interested in the role journalism can play in redefining traditional standards of classical music and is looking to use multimedia to explore the complex relationship between art and humanity.