Gustavo Dudamel is driven by the belief that music has the power to transform lives, to inspire, and to change the world. Through his dynamic presence on the podium and his tireless advocacy for arts education, Dudamel has introduced classical music to new audiences around the world and has helped to provide access to the arts for countless people in underserved communities. As the Music & Artistic Director of the Los Angeles Philharmonic, now in his eleventh season, Dudamel’s bold programming and expansive vision led The New York Times to herald the LA Phil as “the most important orchestra in America – period.”

Dudamel receives invitations from many of the world’s greatest ensembles. In the 2019/20 season, he will lead the Berlin Philharmonic in four concerts for the 2020 Olympics celebrations in Tokyo and will also conduct the New York Philharmonic for a two-week residency at Lincoln Center. Together with the Mahler Chamber Orchestra, he will tour a concert version of Beethoven’s opera Fidelio throughout Europe that will incorporate the famed Venezuelan “Manos Blancas” (white hands) choir. Finally, he will undertake an Italian tour with the Accademia Nazionale di Santa Cecilia, visiting some of Italy’s finest and most important performance venues.

Last season, Dudamel made his long-anticipated debut at the Metropolitan Opera in New York conducting Verdi’s Otello, and he became the first Artist-in-Residence for the 125th season of Princeton University Concerts. This summer he led the Vienna Philharmonic for the spectacular 2019 Sommernachtskonzert at Schönbrunn Palace in Vienna, performing an American-inspired program for an audience of over 85,000, which was also broadcast to over 65 countries around the world. 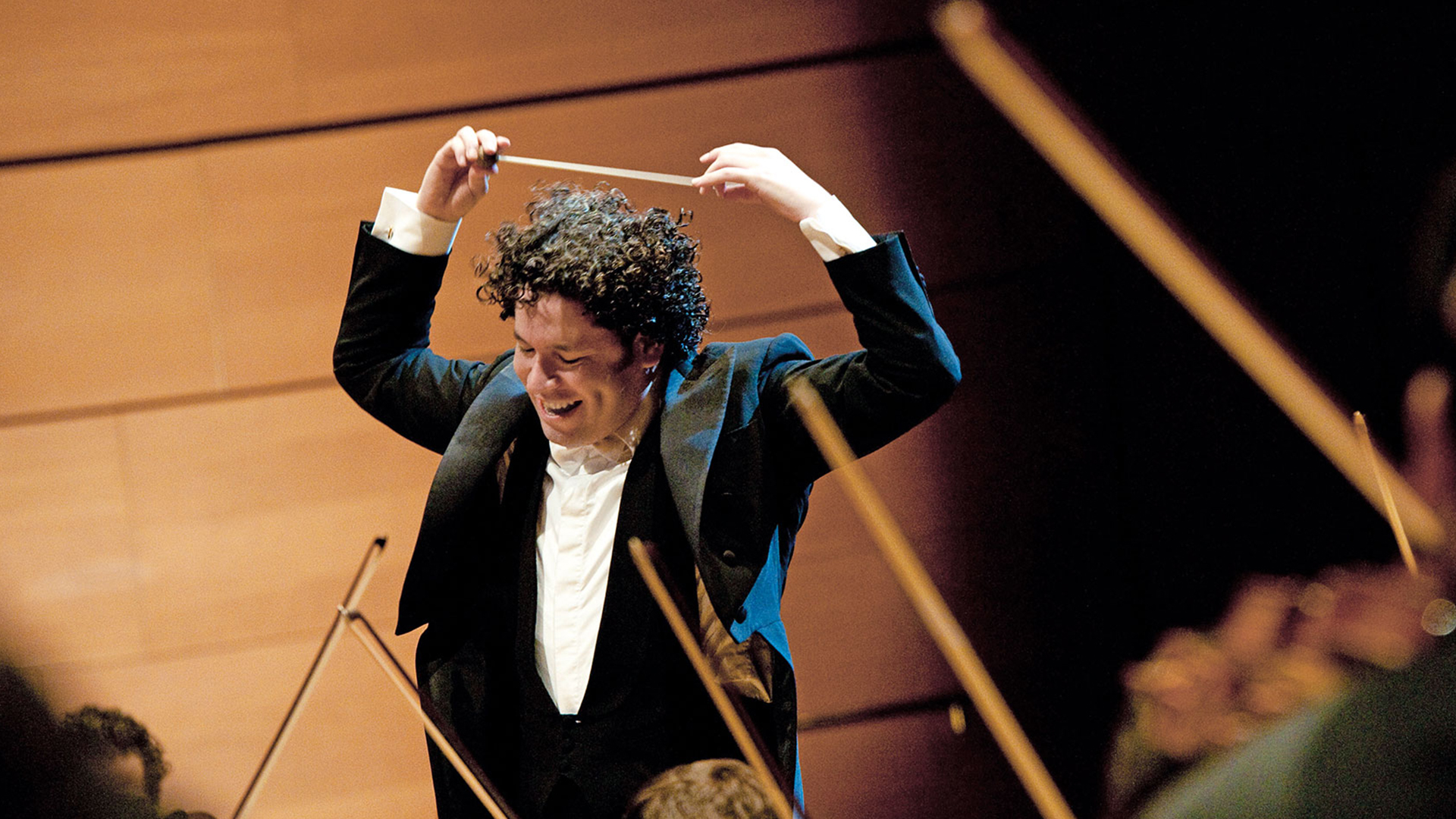 In 2019, Dudamel was honored with a star on the Hollywood Walk of Fame, joining Hollywood greats as well as such musical luminaries as Bernstein, Ellington, and Toscanini. His legacy is tied to Los Angeles, but Dudamel’s musical life was formed in Venezuela. He is the most famous graduate of El Sistema, an extraordinary program of immersive musical training initiated in 1975 by Maestro José Antonio Abreu that gives opportunities to young children, often from poor backgrounds, to learn and play a musical instrument. More than a music program, it is a philosophy that sees music as an agent for social change, and it informs all of Dudamel’s work both on and off the podium.

Inspired by El Sistema, Dudamel, the LA Phil, and its community partners founded YOLA (Youth Orchestra Los Angeles) in 2007, and what started out as a music program in South L.A. for 80 musicians now serves more than 1200 musicians across four sites, providing young people with free instruments, intensive music instruction, academic support, and leadership training. In 2020, YOLA will have its own permanent, purpose-built facility: The Judith and Thomas L. Beckmen YOLA Center at Inglewood, designed by architect Frank Gehry.

Dudamel’s advocacy for music’s power to unite, heal, and inspire is global in scope. In 2017, he led the Royal Stockholm Philharmonic at the Nobel Prize Concert in Sweden, where he also delivered a lecture on the unity of the arts and sciences. His 2018 “Americas” tour with the Vienna Philharmonic – beginning in Carnegie Hall and ending in the Teatro Colón in Buenos Aires – celebrated the symbolic union of North, Central, and South America. A highlight was the Art and Citizenship workshop “Encuentros” in Mexico City, presented by the Gustavo Dudamel Foundation, which brought together 300 young musicians from across the continent in an expression of cultural solidarity.

Dudamel has reached mainstream audiences and achieved name recognition far beyond the classical concert hall. He has collaborated with artists in the realms of pop, jazz, and Broadway, as well as in film and television. Dudamel will conduct Bernstein’s iconic score for Steven Spielberg’s adaptation of West Side Story, due for release in December 2020. At John Williams’ personal request, he guest conducted the opening and closing credits of Star Wars: The Force Awakens and performed with the LA Phil at the 2019 Academy Awards®. A bona fide pop culture persona, Dudamel has had cameos in Amazon Studio’s award-winning comedy series Mozart in the Jungle, The Simpsons, and Disney’s The Nutcracker and the Four Realms, for which he also recorded the score. It was a first for a classical musician when Dudamel, together with members of YOLA, participated in the 2016 Super Bowl Half Time Show alongside pop stars Coldplay, Beyoncé, and Bruno Mars. Dudamel has been featured several times on CBS’ 60 Minutes, profiled on PBS, and interviewed by Christiane Amanpour on CNN, Conan O’Brian on Conan, Stephen Colbert on The Late Show, and Elmo on Sesame Street.

In performance, Dudamel has been featured in many broadcasts, whether cinema, TV, radio, or online, and his extensive, Grammy Award®-winning discography includes 57 releases. Recent highlights with the LA Phil include a double album of some of John Williams’ best-known movie scores, a new reading of Tchaikovsky’s The Nutcracker, and a landmark recording of John Adams’ The Gospel According to the Other Mary. With the Vienna Philharmonic, there’s a recording of the 2017 New Year’s concert, when he was the youngest conductor in history to lead this famous annual performance, plus Mussorgsky’s Pictures at an Exhibition, which included young musicians from Vienna’s version of the El Sistema program. He has made several acclaimed recordings with the Simón Bolívar Symphony Orchestra of Venezuela, including the soundtrack to the feature film Libertador – about the life of Simón Bolívar – for which Dudamel composed the score, and a new album of Beethoven’s Ninth, captured in a live performance in Caracas, Venezuela, in 2015.

Gustavo Dudamel was born in 1981 in Barquisimeto, Venezuela. His father was a trombonist and his mother a voice teacher, and he grew up listening to music and conducting his toys to old recordings. He began violin lessons as a child, but from an early age was drawn to conducting, and at the age of 13, as a member of his youth orchestra, he put down his violin and picked up the baton when the conductor was running late. A natural, he began studying conducting with Rodolfo Saglimbeni. In 1996, he was named Music Director of the Amadeus Chamber Orchestra, where his talent was spotted by José Antonio Abreu, who would become his mentor. In 1999, at the age of 18, he was appointed Music Director of the Simón Bolívar Youth Symphony Orchestra of Venezuela, comprised of graduates of the El Sistema program. Dudamel gained international attention when he won the inaugural Bamberger Symphoniker Gustav Mahler Competition in 2004. Dudamel went on to become the music director of the Gothenburg Symphony (2007–2012), where he now holds the title of Honorary Conductor. Dudamel’s talent was widely recognized, notably by other prominent conductors of the day, but it was the Los Angeles Philharmonic who took the initiative to sign the 27-year-old Dudamel as music director in 2009.

Since then, Dudamel has become one of the most decorated conductors of his generation. Among his many honors, he has received the 2019 Distinguished Artist Award from the International Society for the Performing Arts (ISPA), the Gish Prize, the Paez Medal of Art, the Pablo Neruda Order of Artistic and Cultural Merit in 2018, the Americas Society Cultural Achievement Award in 2016, and the 2014 Leonard Bernstein Lifetime Achievement Award for the Elevation of Music in Society from the Longy School of Music. Leading publications such as Musical America and Gramophone have named him as their artist of the year. He has received honorary doctorates from the Universidad Centroccidental Lisandro Alvarado in his hometown and also from the University of Gothenburg. He was inducted into l’Ordre des Arts et des Lettres as a Chevalier in Paris in 2009. The Simón Bolívar Symphony Orchestra of Venezuela was awarded Spain’s prestigious annual Prince of Asturias Award for the Arts in 2008. He was named one of Time magazine’s 100 most influential people in 2009. In 2016, Dudamel delivered the keynote speech for recipients of the National Medal of Art and National Humanities Medal.

Dudamel continues to exert influence as a musical leader and mentor to young musicians. In 2012, the Gustavo Dudamel Foundation, a registered charity, was created with the goal “to expand the opportunity to experience music for as many children and communities as possible.”