For over half a century, Zubin Mehta has been an influential and beloved artistic leader for the LA Phil, inspiring our musicians and our audiences with his cultural commitment and community vision. The orchestra honored the Maestro with the title of Conductor Emeritus during its 2018/19 Centennial season. 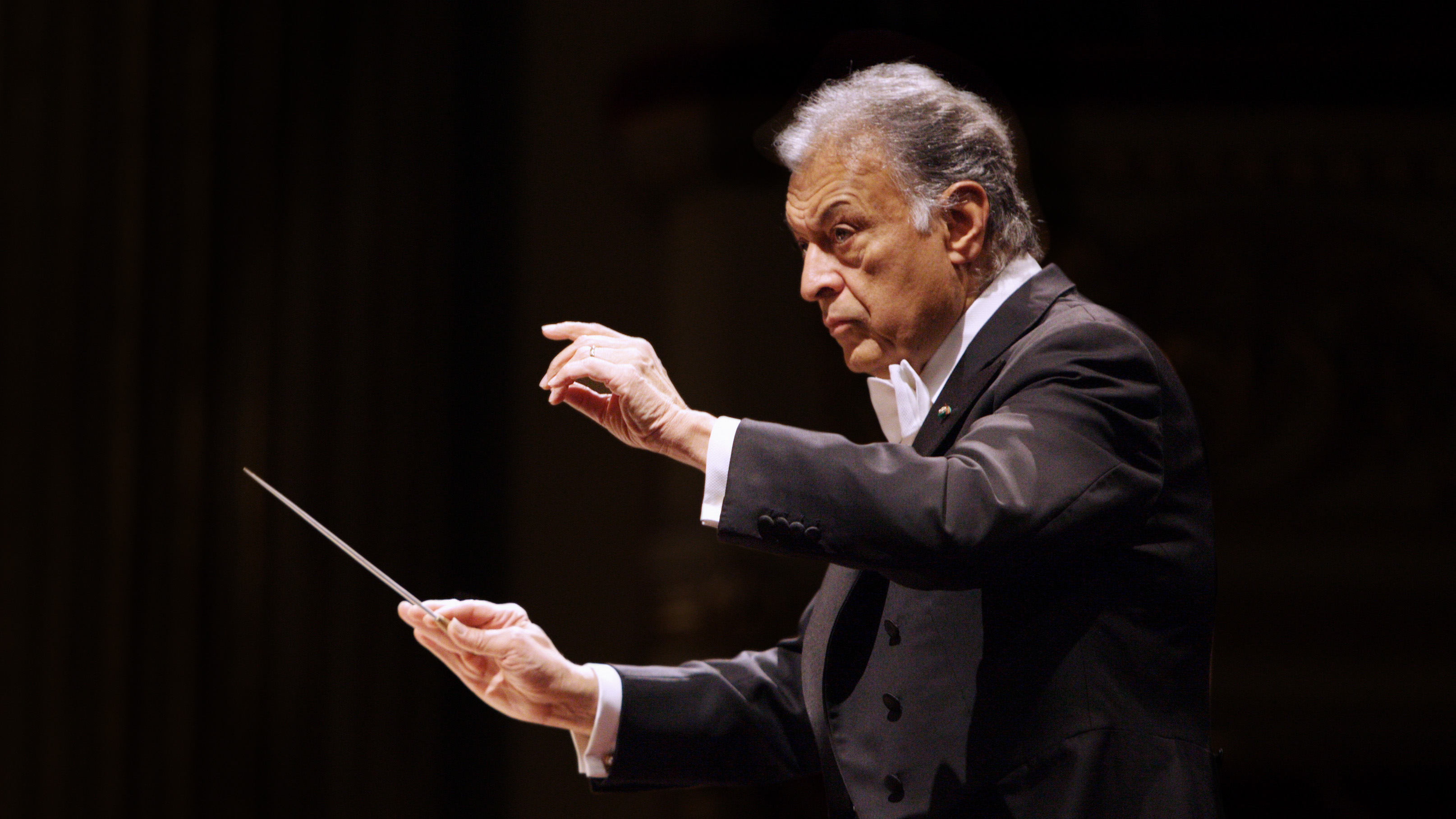 Zubin through the years

Mehta, conducting the Los Angeles Philharmonic during a performance, circa 1965.

Over 5,000 students and faculty sang choruses of Handel's "Messiah," directed by Mehta. The image was printed on the front page of the Evening Outlook...

Mehta conducting the LA Phil at the Hollywood Bowl in the 1970s, showing Frank Gehry’s sonotubes

Zubin Mehta was born in 1936 in Bombay and received his first musical education under the guidance of his father Mehli Mehta, a noted concert violinist and the founder of the Bombay Symphony Orchestra. After a short period of pre-medical studies in Bombay, Zubin left for Vienna in 1954, where he eventually entered the conducting program under Hans Swarowsky at the Akademie für Musik. Zubin Mehta won the Liverpool International Conducting Competition in 1958 and was also a prize winner of the summer academy at Tanglewood. By 1961, he had already conducted the Vienna, Berlin and Israel Philharmonic Orchestras and has recently celebrated 50 years of musical collaboration with all three ensembles.

Zubin Mehta was Music Director of the Montreal Symphony Orchestra from 1961 to 1967 and also assumed the Music Directorship of the Los Angeles Philharmonic in 1962, a post he retained until 1978.

In October 2019, he celebrated his farewell with the Israel Philharmonic Orchestra, which he served for 50 years. On this occasion he was named Music Director Emeritus of the IPO.

In 1978, he took over the post as Music Director of the New York Philharmonic, commencing a tenure lasting 13 years, the longest in the orchestra's history. From 1985 to 2017, he was chief conductor of the Orchestra del Maggio Musicale Fiorentino in Florence.

Zubin Mehta made his debut as an opera conductor with Tosca in Montreal in 1963. Since then, he has conducted at the Metropolitan Opera New York, the Vienna State Opera, the Royal Opera House, Covent Garden, La Scala Milano, and the opera houses of Chicago and Florence, as well as at the Salzburg Festival. Between 1998 and 2006, he was Music Director of the Bavarian State Opera in Munich. In October 2006, he opened the Palau de les Arts Reina Sofia in Valencia, where he was the President of the annual Festival del Mediterrani; there, he conducted a celebrated Ring cycle with the Fura del Baus in coproduction with the Florence opera house. Other Ring cycles were completed at the Chicago Opera and the Bavarian State Opera.

Zubin Mehta's list of awards and honors is extensive and includes the “Nikisch-Ring,” bequeathed to him by Karl Böhm. He is an honorary citizen of both Florence and Tel Aviv and was made an honorary member of the Vienna State Opera in 1997, of the Bavarian State Opera in 2006 and of the Gesellschaft der Musikfreunde Wien in 2007. The title of Honorary Conductor was bestowed to him by the following orchestras: Vienna Philharmonic Orchestra (2001), Munich Philharmonic Orchestra (2004), Los Angeles Philharmonic (2006), Teatro del Maggio Musicale Fiorentino (2006), Staatskapelle Berlin (2014) and Bavarian State Orchestra (2006), with whom he performed in Srinagar, Kashmir, in September 2013. In 2016, the Teatro di San Carlo in Naples appointed Zubin Mehta as Honorary Music Director and the Israel Philharmonic Orchestra and Los Angeles Philharmonic honoured him in 2019 as Conductor Emeritus. In February 2019, the Berlin Philharmonic appointed him their Honorary Conductor.

In October 2008, Zubin Mehta was honored by the Japanese Imperial Family with the “Praemium Imperiale.” In March 2011, he received a special distinction: getting a star on the Hollywood Walk of Fame. The Commander’s Cross of the Order of Merit of the Federal Republic of Germany was bestowed on him in July 2012. The Indian Government honored him in September 2013 with the “Tagore Award for cultural harmony,” which a year earlier was awarded to Ravi Shankar.

Zubin Mehta continues to support the discovery and furtherance of musical talents all over the world. Together with his brother Zarin, he is a co-chairman of the Mehli Mehta Music Foundation in Bombay, where more than 200 children are educated in western classical music. The Buchmann-Mehta School of Music in Tel Aviv develops young talent in Israel and is closely related to the Israel Philharmonic Orchestra, as is a new project of teaching young Arab Israelis in the cities of Shwaram and Nazareth with local teachers and members of the Israel Philharmonic Orchestra.

Read December's Centennial Reflections to learn more about the conductor's storied past with the LA Phil.

The sheer length of Zubin Mehta's tenure with the LA Phil is hard to wrap your head around. For context: twelve U.S. Presidents have sat in the oval office since Mehta first picked up the baton in Los Angeles on January 19, 1961! December's Centennial Reflections recounts two unbelievable-but-true stories from Mehta's nearly six decades with the LA Phil...