Clarinetist DAVID HOWARD has been a member of the Los Angeles Philharmonic since 1981, when, at age 25, he was hired by then Music Director Carlo Maria Giulini. Over the last few seasons he has performed and given master classes at international festivals in Tel Aviv, Vancouver, Helsinki, Beijing, London, Stockholm, and Caracas. With the Los Angeles Philharmonic New Music Group, Howard performed as soloist in John Harbison’s Concerto for Oboe, Clarinet, and Strings under the direction of the composer; he was also the bass clarinet soloist in Iannis Xenakis’ Échange, conducted by Esa-Pekka Salonen. In February 2015 Howard was featured as soloist in the role of the Caterpillar in Unsuk Chin’s Alice in Wonderland. Previously, Howard was principal clarinetist with the New Jersey Symphony and the New Haven Symphony.

A Los Angeles native, Howard received a B.A. in Russian Literature from Yale University, graduating magna cum laude. In collaboration with former Philharmonic pianist Zita Carno, Howard recorded a compact disc for the Centaur label entitled Capriccio: Mid-century Music for Clarinet, which includes works by Leonard Bernstein, Paul Hindemith, and Witold Lutosławski. He has also released a compact disc on the Yarlung label, which includes works by Esa-Pekka Salonen, Steven Stucky, Galina Ustvolskaya, and Brahms; this disc was also released as a high-resolution download by Linn Records. Since 1986, he has served on the faculty of the Thornton School of Music at the University of Southern California. 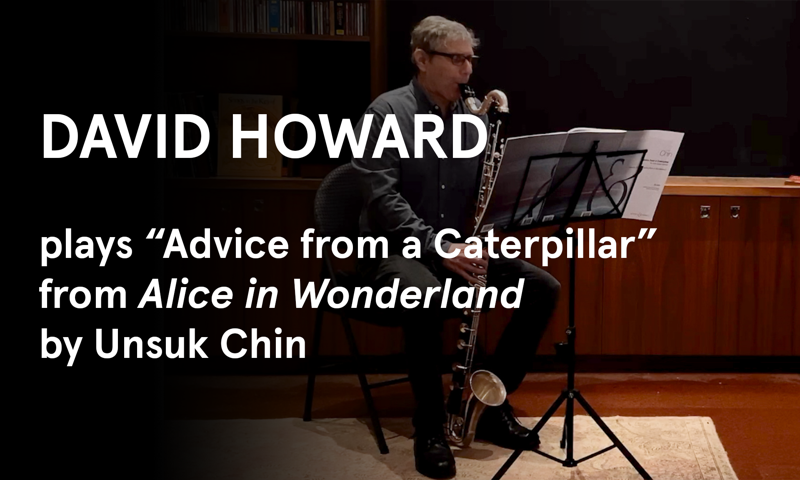 Unsuk Chin’s “Advice from a Caterpillar” with David Howard