JOSEPH PEREIRA (1974) enjoys a multi-faceted career as a timpanist/percussionist, composer, conductor, and teacher. His work in all areas has been widely hailed for his creativity and virtuosity, and has been profiled in feature articles in both The New York Times (2006) and The LA Times in 2012 and 2015. In 2015 Pereira was featured on the PBS series, “Craft in America”.

Pereira was appointed Principal Timpanist of the Los Angeles Philharmonic, by Esa-Pekka Salonen in 2007.  He regularly appears as a solo percussionist in the orchestra’s “Green Umbrella” new music series. He currently runs the percussion studio at USC’s Thornton School of Music and also teaches at the Aspen Music Festival and the Music Academy of the West.  Previously he was the Assistant Principal Timpanist/Section Percussionist of the New York Philharmonic, from January 1998 to September 2008. Pereira was on the faculty of the Juilliard School from 2005-2013.

As a composer, Pereira’s works have been commissioned and performed by The Los Angeles Philharmonic, The Colin Currie Group, The Miro Quartet, The San Francisco Contemporary Music Players, Duo Harpverk, New York Philharmonic Chamber Series, Los Angeles Percussion Quartet, Music Academy of the West, Aspen Music Festival, the Manhattan School of Music, The Juilliard School, The Royal Academy of Music, Hear Now/LA/Paris, and pianists Joanne Pearce Martin and Piano Spheres LA for Vicki Ray. Pereira’s triple concerto Threshold, for timpani and two percussion, featured the Maraca2 percussion duo and Pereira as Timpanist.  The piece was premiered in 2018 by the Los Angeles Philharmonic, and Gustavo Dudamel. This season the Singapore Symphony will perform the Asian premiere with conductor Pascal Rofe, in May 2019.  Other important performances this season will be by the French Ensemble TM+, on the Hear Now Music Festival at Zipper Hall, and the Colin Currie Group in the UK.

In 2016, he conducted his piece for amplified bass quartet, which was selected for the Hear Now Music Festival in LA. Also in 2016, his string trio Blur, was performed at the Hear Now Paris American Music Festival. In 2012, the Los Angeles Philharmonic premiered his Percussion Concerto with soloist Colin Currie. The work was programmed again the following season with Pereira as the soloist with the Los Angeles Philharmonic and Gustavo Dudamel, in Los Angeles and at London’s Barbican. His works can be heard on Yarlung Records, Sono Luminus, Electrum Duo, and New Focus Recordings.

In 2007, his first orchestral piece, Mask, was selected by the American Composers Orchestra’s annual new music readings for top emerging composers. At the New York Philharmonic, he conducted the premiere of his Quintet for Winds in 2005 on the Chamber Ensembles series at Merkin Concert Hall.  The New York Times said, “…it is a restless yet lucidly textured work with an astringent harmonic language.”  Pereira’s percussion works are published by Bachovich Music.

Pereira has also performed with the New York New Music Ensemble, Alea III, the Boston Symphony Orchestra, the Robert Shaw Festival Singers, and the New Zealand Symphony Orchestra as principal timpanist. He can also be heard on Telarc, Teldec, and Deutsche Grammophon/Itunes recordings, as well as soundtracks to many major motion pictures. His custom line of timpani mallets are manufactured and sold worldwide by JG Percussion. When not performing, writing, or teaching, Pereira likes to cook and spend time with his wife, LA Phil violinist Minyoung Chang, and their daughters Sophia and Julia. 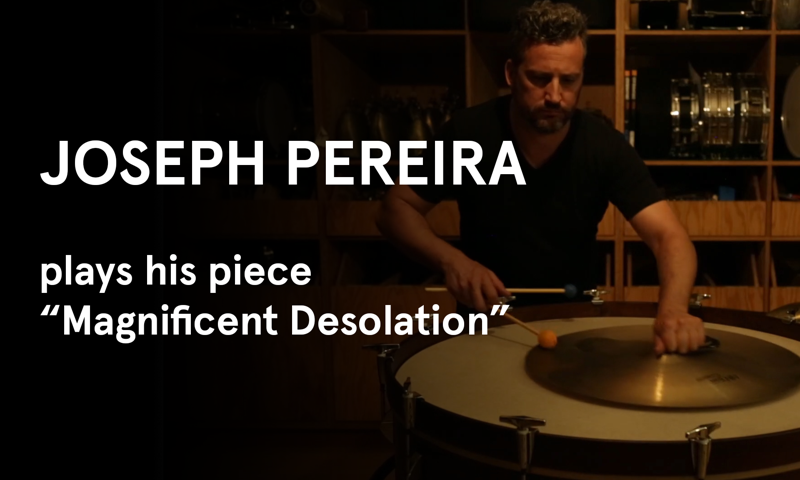 LA Phil Principal Timpanist composed and performs this work inspired by Buzz Aldrin’s impressions of walking on the moon.