Michael Fuller is a first-year Resident "Bass" Fellow at the Los Angeles Philharmonic. Born and raised in the City of Brotherly Love, Fuller began playing the bass at the age of 12 with the help of Benjamin Blazer, Nanette Foley and Marjorie Keefe. He attended the city's prestigious High School for Creative and Performing Arts (CAPA).

Following his time at Rice, Fuller was invited to join the New World Symphony, where he spent three seasons performing under Music Director Michael Tilson Thomas. Over the years, he has also worked closely with bassists Joseph Conyers, Harold Robinson, and Paul Ellison. During his time at the New World Symphony, Fuller performed on a "Luigi Chiericato" model bass constructed by Barrie Kolstein in 2008, a loan made possible with the generous support of Mr. Kolstein, for winning the Doublestop Foundation's 2016 Instrument Loan Competition.

Fuller has performed with various ensembles across the country, such as the Shepherd School Symphony Orchestra, National Repertory Orchestra, New York String Orchestra Seminar, Houston Latin Philharmonic, Orlando Philharmonic, Palm Beach Opera, Chautauqua Festival Orchestra, and Roundtop Festival Orchestra. He has enjoyed his experiences performing in venues such as the Kennedy Center, Verizon Hall, and Carnegie Hall. He has also attended the Wabass Institute for the 21st-Century Bass Player, a one-week intensive workshop where he had the opportunity to work with Ranaan Meyer, Eric Larsen, and Harold Robinson.

Fuller has been invited as an Alumni Fellow on a performance tour of Italy with the Philadelphia All City Orchestra, touring cities including Rome, Assisi, Montecatini, Perrugia, Siena, and Lucca. The tour concluded in Florence with a performance at the Loggia del Lanzi, overlooking the Piazza del Signoria during the annual Festival delle Orchestre Giovanili.

Fuller currently spends his summer months performing with the Spoleto Festival Orchestra in Charleston, SC and will be coaching the brilliant young musicians of the National Youth Orchestra of the United States of America (NYO-USA-NYO2) as an Orchestral Fellow. 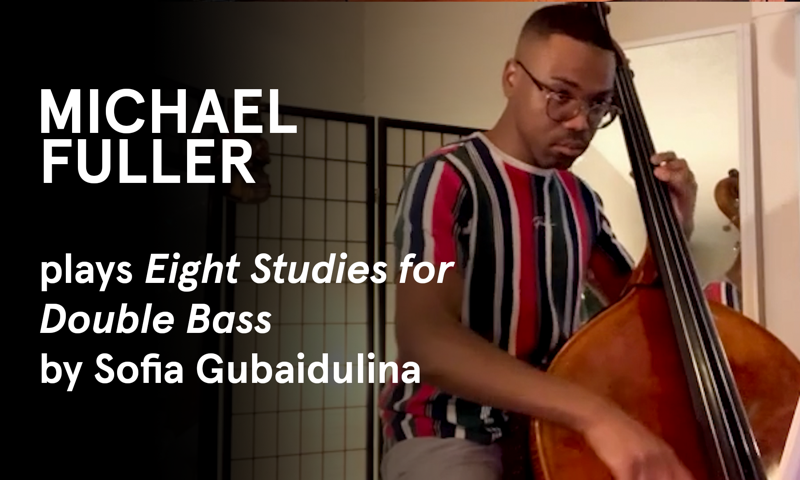 Michael Fuller shows off the expressive range of the bass in three etudes.