Wesley Sumpter is a percussionist and drummer from Atlanta, GA. He holds a Bachelor's Degree in Percussion Performance from the University of Georgia under the love and guidance of former Pittsburgh Symphony timpanist Timothy Adams Jr. and former Tucson Symphony timpanist Kimberly Toscano. Wesley is currently pursuing his master's degree at the University of Southern California under the LA Phil's own James Babor and Joseph Pereira. Wesley has performed as percussionist and timpanist with the Louisiana Philharmonic, Santa Barbara Symphony, Atlanta Symphony, and Los Angeles Philharmonic. He recently accompanied the Louisiana Philharmonic during their inaugural tour to Carnegie Hall, highlighting the music of Philip Glass and Silvestre Revueltas.

As a member of the percussion trio Lineage, Wesley and his friends Lauren Floyd and Trevor Barroero made history in May of 2016, winning the bronze medal in the Wind Division at the Fischoff National Chamber Music Competition. They became the first percussionists in the 43-year history of the competition to be selected as a senior-division finalist. Before this, Lineage was a semifinalist of both the Coltman Chamber Competition and the 2015 Fischoff Competition and was a third-place winner at the Percussive Arts Society's Chamber Competition.

Wesley was a semifinalist in the 2014 and 2015 Atlanta Modern Snare Drum Competition and has also attended the Eastern Music Festival and Aspen Music Festival and School. He was a drummer on VH1's feature film, Drumline 2: A New Beat in 2014. An avid drummer, Wesley has performed as a studio drummer and freelancer throughout Athens and Atlanta, GA. He has played with artists such as Macy Gray and frequently with his band, Misnomer (formerly known as Mister Tie Dye), who just released their debut album, Neighborhood, on Spotify and Apple Music. In the summer of 2018, Wesley will be featured on Alfred Music's new instructional DVD entitled Sound Percussion. When in Atlanta, Wesley teaches at Benjamin E. Mays and Tucker High Schools and the Allegro Music Camp under the direction of Leon Daughrity. Wesley would also like to attribute his growth and success to his life-long mentors Robert Jeffrey, Sr., William Earvin, Sr., William Oliver, and his father, Alfonza Sumpter, Jr. 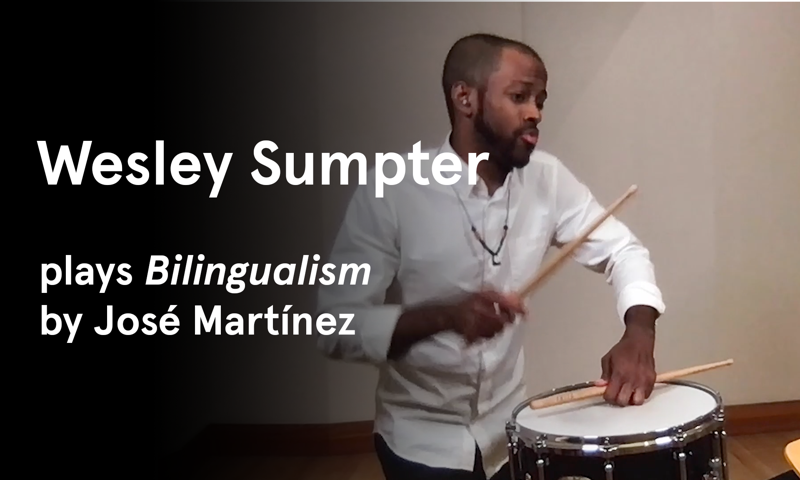 Percussionist Wesley Sumpter explores the many sounds and musical languages of the snare drum.

NCI 2020: Bethany Younge's At Midnight I Walked into the Middle of the Desert

The LA Phil’s Resident Fellow in percussion, Wesley Sumpter, releases the tempestuous energy of *At Midnight I Walked into the Middle of the Desert* by...

LA Phil at Home: The Percussionists

Jazzy songs from the early 20th century for five xylophones and drums.